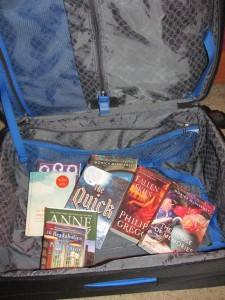 Four BOOKS TO PACK on Friday
Yesterday, my friend and fellow blogger at SmartGirlsRead posted a meme from Good Reads about choosing which book to read next.  She commented how appropriate it was as she was trying to pick which books to pack for an upcoming trip.  As I am also getting ready to head out for Spring Break, I started to think about which books I was planning to pack.

I honestly think I spend more time choosing which books to pack than which clothes!  There are strict guidelines and criteria for every travel adventure and the books chosen must meet those standards.  I usually put out a pile of books on the bed and evaluate each: hardcovers are cumbersome and heavy in a carry-on, library books are ripe for getting left or lost, and ebooks . . . well, that is a completely different blog post!  Anyway, as I look at the stack, I realize that there are four main types of books that I pack for a trip.

The one I’m currently reading
This is the book that I intended to finish prior to the trip.  You know, the one that just has about 50 pages left and I am going to sit down and finish it as soon as I finish packing . . . folding laundry. . . cleaning out the fridge.  The one, despite my best intentions, does not get finished.  I can’t wait the three days, five days, or week until I get home to finish it!  Then I will be busy unpacking . . . doing laundry . . . restocking the fridge.  You get the picture.  It doesn’t matter how many pages are left; it has to get thrown into the carry-on bag and most likely will be completed in the waiting area before I even board the flight.

The one I can’t wait to read
This is the one I’ve been saving.  The one that I’ve put aside special for the trip.  The one whose anticipation gets me just as excited as the trip itself.  When I was young, my mom would purchase books for us whenever we traveled.  She quickly realized that I would read them before the trip, and she started to wrap them and they couldn’t be unwrapped until the vacation started.  For me, as soon as the car was backing out of the driveway, the spine would be cracked open and I would start reading.  The apple doesn’t fall too far from the tree because I have to do the same with my own children!!  I often remember these books as I remember the trip:  California 1983 – Trixie Belden 12:  The Mystery of the Blinking Eye, New England 2009 – C. S. Harris’ What Angels Fear, Austin 2014 – Deborah Harkness’ The Book of Life.  See what I mean.

The one I’m not sure about reading
This is the book that involves a psychological game with myself.  This is the book on my shelf that either I am not sure that I want to read or that I am afraid to read.  For whatever reason – a new author, a major plot twist, an uncomfortable conflict – I am apprehensive about starting this book.  My thought is that if it is with me, I will be forced to try it.  I may like it, I may not; but I will try it because I have it with me and there are no other options.  This way, I have found books that I have loved and books that I have given 50 pages to and said forget it.  For some reason, books are easier to let go of without guilt when you are on vacation!

The one for the flight home
I very intentionally pick a book that I plan to read on the flight home.  It is almost always a fluff book that requires little to no brain-power, an author or plot-line that I know I will enjoy, and one that can be completed easily within the flight timeframe.  I know that when I get home, reality will hit me in the face and my reading time will become non-existent.  If I don’t finish the book on the trip home, it won’t get finished.  This is my detox downtime reading before the transition back to real-life.  These are my guilty pleasure books that will make me laugh-out-loud but won’t remember days later.

As an additional note, I usually budget a book a day.  I rarely complete that, but as you know, one must be ready for a zombie apocalypse . . . or a delayed flight . . . so it is best to be prepared!   Yes, this makes my suitcase heavy, and yes, I will sacrifice shoe space for books.

So, what kind of books to you pack for travel?

Four FAVORITE LOVE STORIES on Friday
Ah, Valentine’s Day.  I think most people have a love-hate relationship with this particular holiday.  Don’t get me wrong; I fully admit that I am, and always have been, a hopeless romantic.  I am the one sobbing at the end of a book or movie while my children slowly edge away, pretending not to know me.  I also have a bit of sarcastic wit and quirky view of life.  This creates a bit of a paradox when it comes to love stories.  It’s like love songs – Bryan Adams’ “Everything I do, I do for you” melts my heart but I also have a true appreciation of Meatloaf’s “Two out of Three ain’t bad.”

There are countless stories out there and although I appreciate a bit of cynicism and conflict, I am a sucker for a happy ending.  Here are four of my favorite “love” stories.

A Discovery of Witches by Deborah Harkness
Diana Bishop, a witch, and Matthew Clairmont, a vampire, do the unthinkable; they fall in love.  While researching in Oxford’s Bodleian Library, she discovers a bewitched alchemical manuscript.  Inadvertently, the reappearance of this manuscript, which has been hidden for centuries, reignites the age-old conflict between witches, daemons, and vampires.  Over 1500 years old himself, Matthew is drawn to this young, inexperienced witch who is defiant and dismissive of her powers and the secrets that she doesn’t know that she possesses.

My cousin recommended this book to be and I admit I was very hesitant.  I’m confessing here; I have never read The Twilight Saga.  Shocker, I know, but I’m just not a huge vampire fan.  The Discovery of Witches, and the two other books in the All Souls Trilogy – The Shadow of Night and The Book of Life — completed changed my attitude.  This series is an intelligent perspective on the various creatures that could live in our world and Harkness’ detailed research and historical accountability make it a fascinating read.  I enjoyed the love story that brought two different creatures together, despite both of their denials, and what they must endure for themselves, their families, and their world.

The Princess Bride by William Goldman
Buttercup and Wesley are in love but are poor.  He goes off to seek his fortune, is captured, and is killed by pirates.  Buttercup is despondent and years later becomes engaged to Prince Humperdinck.  She is kidnapped and rescued by none-other-than Wesley.  True love must save the day, along with giants, Sicilians, and a revenge seeking Spaniard.

If you haven’t seen the movie The Princess Bride, well then I am sorry, we cannot be friends because it is quite honestly one of the best ever.  If you have seen it, you must read the book.  I loved the movie and when I picked up the book, I was in for the shock of my life.  The book is the movie . . . plus all the boring stuff that is in the original S. Morgenstern’s tale.  William Goldman injects hilarious and entertaining commentary throughout the entire novel about how his father “left out” parts when he read the story to his son as a small boy.  As good as the story is, the “outtakes” are even better.

Sense and Sensibility by Jane Austen
Elinor and Marianne Dashwood, along with their mother and youngers sister, are rudely pushed out of the family homestead when their father passes away.  As they are the children of his second marriage, his son from the first marriage is heir and owner of all of his father’s possessions.  As they attempt to find themselves in their new and much reduced circumstances, the reader sees the strong differences between the two sisters.  Elder Elinor is practical and reserved; Marianne is impulsive and emotional.  Both of them discover love and learn a great deal about themselves.

You know I had to include a Jane Austen, and my favorite of hers is Sense & Sensibility.  Linguistics lesson here – sense refers to perceptions and sensibilities refers to emotional responses.  I love how the title applies to both sisters and the claim Austen makes that both are required for love and companionship.  Emma Thompson’s version of this as a movie is also one of my favorites.  This film does a great job at making the story poignant and relatable without being sickeningly sweet.

Much Ado About Nothing by William Shakespeare
Returning home from war, Benedick and Claudio are ready to celebrate their victories.  Claudio is in love with the beautiful Hero and through some comedic interplay, woes her for his wife.  Her cousin, Beatrice, and Benedick have past history of witty and often caustic banter; although secretly, they slowly begin to discover their affection for one another.  When Hero is maliciously maligned, Beatrice and Benedick work together to clear her name.

I love Shakespeare’s comedies but my all-time favorite is Much Ado About Nothing.  I love the varying views of love and how intelligence and humor are keys to a successful relationship.  I have a soft spot also for this show because I played Hero in a college production and it was one of the roles I have enjoyed most playing.  The Kenneth Brannagh and Emma Thompson film version of this play is fabulous and absolutely beautiful to watch.  Joss Whedon, of The Avengers fame, did a modern version that shows how Shakespeare’s themes are truly universal and timeless . . . yes, that is me as an English teacher speaking.  There is a new book out called Beatrice and Benedick by Marina Fiorato that is a fictional telling of what occurred between these two characters before the story begins, and yes, it’s on my wishlist!

So, these are only four of mine; what are your favorite love stories?