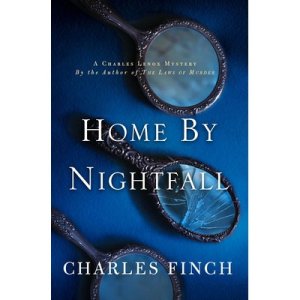 Book Summary:
It is London, 1876, and after a very challenging and disheartening start to his detective agency, former Member of Parliament, Charles Lenox, has settled well into his new career.  As a member of that part of society whom “trade” is considered below them, Lenox has spent many years helping Scotland Yard and indulging his own interests and queries by engaging in detective work.  By joining forces with two other detectives, the formulation of their agency solidifies his dedication to his talents.  However, Lenox realizes how this comfort of pursuing a career that he enjoys and enjoying the life of husband and father can be shattered when his older brother’s wife dies suddenly.

As Edmund retires to the Lenox family estate in Markethouse, Charles feels compelled to join his brother in concern for his health in his grief.  Furthering the depth of the loss of Molly, Edmund’s sons Teddy and James are away from England and have not heard the news.  While in Markethouse, Edmund oversees the care of his estate but also as its Member of Parliament, he administers legal counsel.  Arthur Hadley is a resident of Markethouse and a vice director of the Dover Limited Fire and Life Assurance Company.  He approaches Edmund and Charles with a perplexing story.  Upon his most recent return from traveling for work, Hadley came home to his house to find a candlelight in the window.  He then saw a face in the window that disappeared.  Nothing was stolen from the house and other than a disturbing chalk outline of a girl on his front stoop, nothing else was amiss. Hadley then reports that a few days later he was called out of town for a fire insurance claim that was a false report.  When he returned home, he discovered that a bottle of sherry was missing.  All this occurred while his charwoman, Mrs. Watson, was in the home.  Hadley has no reason to question Mrs. Watson’s dedication but fears for his own safety that someone is able to enter his home without his knowledge.  Edmund’s curiosity is peaked and because of this spark of interest in his brother, Charles agrees to take the case.

However, this is not the only case Charles has on his mind.  Back in London, famous German pianist Mueller was the talk of all London.  He recently played a concert, bowed to the audience, returned to his dressing room, and disappeared.  No trace of a violent struggle or any explanation of how he was able to leave the theater without being seen is evident.  Scotland Yard is thoroughly confused and under a great deal of pressure from the press, and the Queen herself, to discover the whereabouts of the missing pianist.  To make matters worse, Scotland Yard has asked for the assistance of LeMaire, a detective who was formerly with Lenox and his partners, but left to form a competing agency.  To top everything off, a number of Lenox’s discreet clients have left his agency for LeMaire.  There seems to be a traitor in their office.

Traveling back and forth between London and Markethouse, Charles tries to juggle the three cases.  When someone is viciously assaulted and a body is discovered, the pressure to solve the cases escalates and Charles must draw on all this investigative skills and powers of deduction to find a killer, a traitor, and a missing person.

Book Commentary:
The book jacket of the Charles Lenox books describes the stories as “equal parts Jane Austen and Charles Dickens,” and this is truly a fitting description.  I have followed the Charles Lenox books since the first one and the character has really grown and developed.  What I most appreciate about his character is his humanity; he makes mistakes, at times he can be a bit conceited, and yet, he is always a proper English gentleman.  The cases he solves are varied and complex, and the storytelling isn’t fast-paced, but rather engaging and thoughtful.

I love this series!  I usually am drawn to female protagonists in historical mysteries so this is a pleasant departure for me.  I enjoy the ways women must work within the confines of the society in which they live.  The Charles Lenox series follows a similar pattern as he must work within the parameters of the land-owning population of 1870’s English society.  The juxtaposition of Charles dining at his club and then running through the back streets of the seedy parts of London gives great dimension to his stories.  The author has a very dry wit and though not formal, writes in an elegant, refined manner.

Who might like this book:
If you like classic British mysteries then this book is for you.  The story is engaging and thoughtful with quite a bit of wit, personality, and humor.  This is a great series that I think appeals to both genders.  Author of the Lady Emily series Tasha Alexander often comments on her love of this series and that is a great endorsement for me!

Here is the series in order:
A Beautiful Blue Death
The September Society
The Fleet Street Murders
A Stranger in Mayfair
A Burial at Sea
A Death in the Small Hours
An Old Betrayal
The Laws of Murder