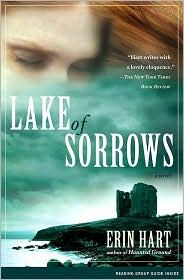 Book Summary:
Pathologist Nora Gavin comes to the Irish midlands when a well-preserved body is discovered in the bog.  The man’s remains indicate that he was the victim of an ancient pagan sacrifice because of multiple wounds on his body; the Triple Death is evident by his strangulation, the slit of his throat, and the spikes driven into his arms. Also working the site is Ursula Downes who seems antagonistic towards everyone and happens to have had a former relationship with Nora’s boyfriend, Cormac Maguire.  When a second body is found in the bog with similar Triple Death markings, the research team is excited but then horrified.  This body can’t be ancient because of the wristwatch on the victim’s arm.

Cormac Maquire also arrives on the scene; he recently inherited a cottage located close to the excavation site from an old friend.  It provides Nora a place to stay and give Cormac and Nora an opportunity to work on their relationship.  Nora’s sister was brutually murdered five years ago and the killer was never found; Nora still struggles with finding the clues that will put the killer behind bars.

Detective Liam Ward struggles with the case as it brings back memories of his own wife’s suicide.  Owen Cadogan, the site manager, is angry about Ursula’s rejection of him after a relationship the previous year.  Charlie Brazil, a local beekeeper, is haunted by his uncle’s disappearance and his father’s ailing health; he is also a local pariah because of his eccentric behavior.

With all the secrets and mysteries of the players, an aura of both violence and desire pervades the excavation site.  When new body is discovered, not in the bog but in a bathtub, accusations and tempers fly.  Cautiously Nora and Cormac must work to find the answers to all the deaths before the body count rises again.

Book Commentary:
This is the second Nora Gavin book I have read and I enjoyed it just was much as the first one.  The author does a fabulous job at blending ancient deaths and modern deaths.  She shows how the motivations for murder really haven’t changed over the course of centuries.  I love the psychological analysis and the varying characters’ viewpoints as she plots through the story.  So often secondary characters are there just to support the main characters.  Hart develops her secondary characters in such a way that the reader feels that they could have a story of their own.

Underlying the entire story is the relationship between Nora and Cormac.  I really found that I enjoyed these two characters even more with the second book and I am really rooting for their success.  As an outside observer, the reader can see the fragile balance of each of their own demons and their shaky, but meaningful, relationship.  I really, really hope they make it!

Once again, the second book in the series plays on the idea of a modern day gothic mystery.  The blend of contemporary science and pathology with the atmospheric Irish countryside and customs of the ancient inhabitants of the land creates a mood of suspense and intrigue.  Although the series is classified as contemporary, it really has a timeless feel.

Who might like this book:
If you liked Erin Hart’s first book Haunted Ground, you are sure to like this one.  The characters are developing in both their personal and professional experiences while being involved in a completely new story.  I recommend reading the first book before this one if you haven’t already.